“R” is for R-value and this week our new home is getting plenty of it. Who says that Studs don’t look pretty in pink?  “R” is also for race which is a good word to describe the speed of activity inside and out. That’s not to suggest that speed means a sacrifice in quality. Prinston Homes’ and its team of contractors are doing an amazing job. Today, Chad Hope Excavating put the finishing touches on some backyard landscaping (it looks awesome!!) while, inside, contractors built the ultimate en-suite shower as well as installed insulation, bath tubs and the wiring for life’s basic needs — internet, satellite, phone and in-ceiling sound system.  Let’s crank it up. 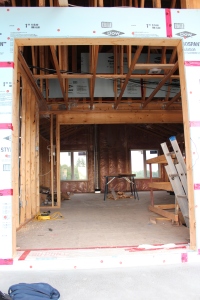 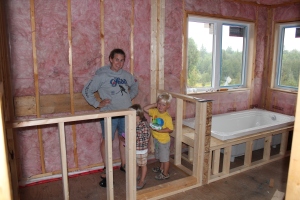 6 comments on “Pretty in Pink”